Skip to content
April 23, 2017 shepard
As most of my friends know, one of my areas of interest is propaganda. It is time for the Best Propaganda Event of April 2017 winner to be unveiled, drum roll please…  and the winner is, the United Nations Sustainable Development Programme and their Earth Day Science Propaganda campaign! This “Science” media stunt might even get them the annual award, it was VERY well played. They did a great example of the famous “war is peace” and “slavery is freedom” theme.
Many years ago a goal was set to move most people into urban centers, and the UN was selected as the vehicle to achieve this goal. It was decided that one tactic would be public fear, and that the “environment” would be used as one of the elements to achieve this “fear.”  This programme is officially named Agenda 21.  UN WEBSITE.  Rosa Knori is a whistle-blower, and some of her talks are on YouTube.  She also authored, Behind the Green Mask.
For more than 30 years, the good work started by Green Peace and similar organizations has been hijacked by the UN and those assisting them, many of whom are useful idiots.  Combined, this Major Group, which is comprised of governments, non-profits, churches, individuals, the press and special agencies is known as the Sustainability Movement.
The Earth Day campaign has been a successful tactic, as was the fake news documentary “An Inconvenient Truth.”  Even though this documentary has been proven to be a farce and an insult to science, it remains in most simpleton’s memories a valid “proof” that mother earth is dying and if they don’t send their flowerpot soil to a government contracted chemical plant to recycle the dirt, they are in essence killing our mother.
The issue of “science” has been an ongoing theme.  The SM has successfully made sure that “studies” that examine things like, “The Dramatic Warming of the Earth” will be funded heavily.  The results and authors will receive great acclaim and these “experts” will then go on to write papers and books as well as “best practice” advice for the rest of us to follow.
The scientist seeking a grant for a study that examines, “Climate Fluctuations Remaining Normal for the Last 1,000 years” will not be funded.  These actual scientists will be mocked by the pseudo-scientists that are funded by grand universities and government agencies.  The press will jump in to mock and silence these “deniers” that are so obviously opposed to all that is holy and good.  The climate scientist community is funded primarily by tax dollars, and without the special privilege of “free money’ these scientists would not be needed.  Is is like the emperor with new clothes, if an industry formed around “experts” commenting on the fashion of his new suit, the people in this industry would do everything in their power to silence the little boy that honestly observed that the emperor was in fact nude.  Thus the Major Group wins again.

The website Climate Depot is worth examining.  Do you think maybe the pseudo-scientists has besmirched this site and the authors and scientists that are involved?  You betcha.  Any scientist that wants to be funded knows that there is only one direction to take regarding climate change hysteria, and that is the political direction of climate change being imminently dangerous and action being needed.  A scientist that observes that climate is changing, has always changed and that it is not a problem that can be or needs to be fixed by humans, will be shunned from the “scientific community” faster than a wacko talking about the earth being spherical 3,000 years ago.
Anyway, the information necessary to make a reasonable and fair examination of the issue is available online.  Know that many skilled web geeks working with the Major Groups have teamed with their “pseudo-science” brethren to search engine optimize the ridicule of any “deniers” of the impending climate calamity.  The gullible masses, especially in wealthy countries eat it up and believe every word.  The Earth Day Science Propaganda campaign is a brilliant action to achieve their goals.
So, the award for awesome propaganda definitely goes the United Nations, Division of Sustainability!  Well done ya’ll!  The new wire was buzzing in late April 2017 with headlines and stories all proclaiming the wonderfulness of the campaign.  Google Earth Day Science Campaign under “news” and check out there mighty success!!! 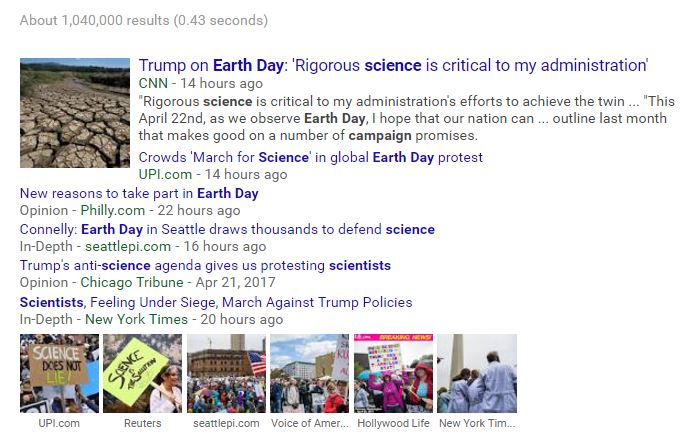