My first letter of reference came from an elderly volunteer that taught “fishing” to disadvantaged youth at a Boy’s Club near the Project Housing where I lived when I was 13 years old.  It had to do with being polite, respectful and helping him carry his gear to his car after the class.  Since then, I have worked hard to live a good life and be a good and productive human.

Back in the day, reputation was very important.  It still is.  From my early teen years forward, I have intentionally focused on doing the right thing, and doing it well.  I have worked hard and as a result, I am proud of my reputation and believe that it is earned.

I have had a wide variety of interests and enjoy creating value for others.  Hopefully the following will provide a global view that can be helpful in your evaluation of opportunity about partnering with me, even if it is not in saddle repair, SWAT cop sniper team services, dish washing, luxury shooting experiences, busing tables, trophy animal mount cleaning, security consultation, burger flipping, investigating crimes against children, windshield repair, long range shooting, working as a “cleaner” for a 3-letter government agency, executive protection, officiating weddings or any of the many other things I have produced.

I appreciate my neighbors, clients, bosses, business associates, philosophy colleagues, friends, employees, tenants, girlfriends, landlords, vendors and others that are willing to share an honest perspective with those seeking to exchange value with me.  Following is a glimpse into 30+ years of effort, and what I believe to be one of my most valuable assets.

I started the Jackson Hole Shooting Experience in 2010, and served many people directly before training an incredible staff to provide the services.  The following includes reviews of me personally and also of the team that I trained that landed us as the highest rated thing to do in Jackson Hole. 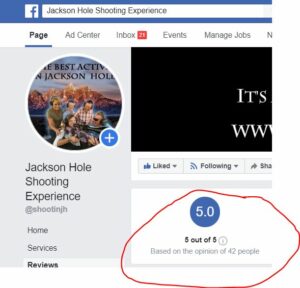 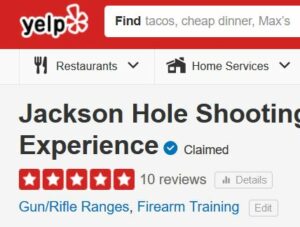 A sample from LinkedIn 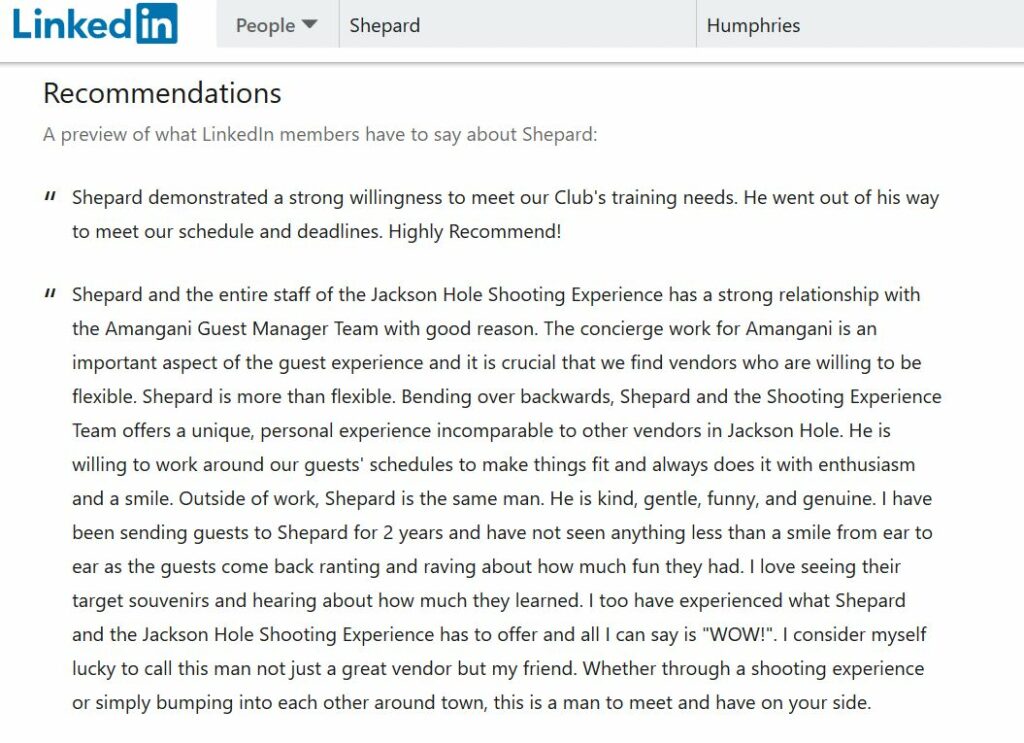 The are other nice things people have said about this business, but enough about shooting experiences. 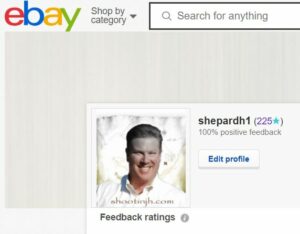 Some reviews from my time as a police patrol officer, SWAT sniper team leader and crimes against children detective were negative.  For some reason some of my clients were not happy with me.  😉  Other folks WERE happy with what I produced. 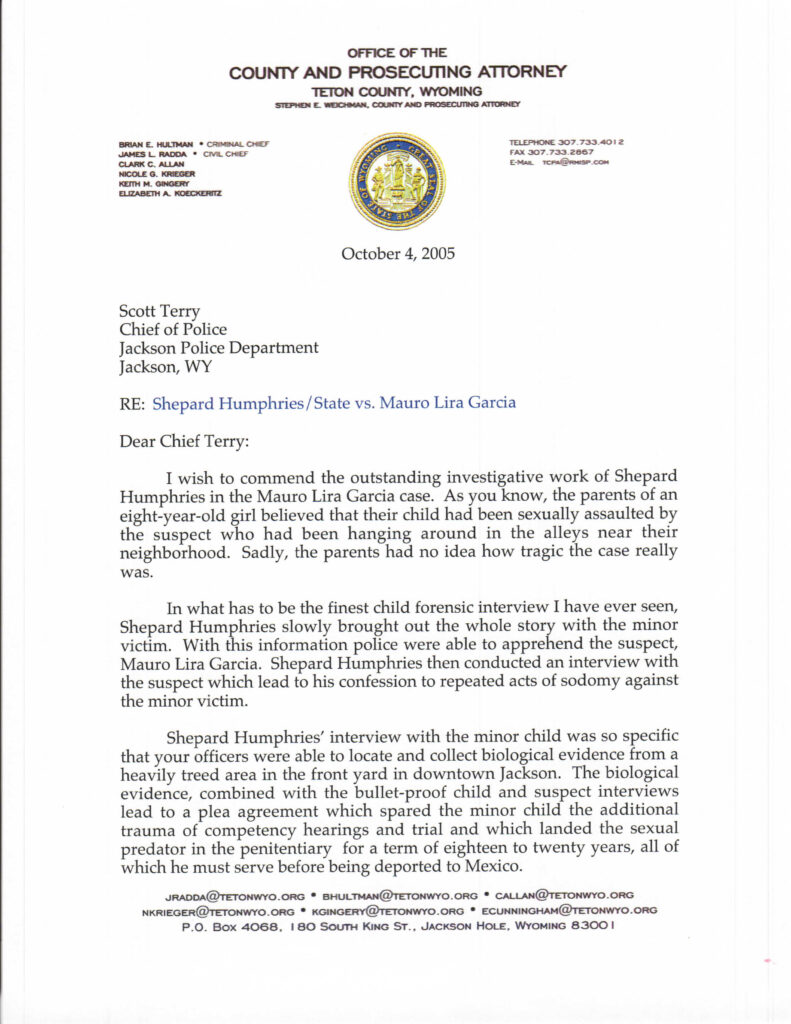 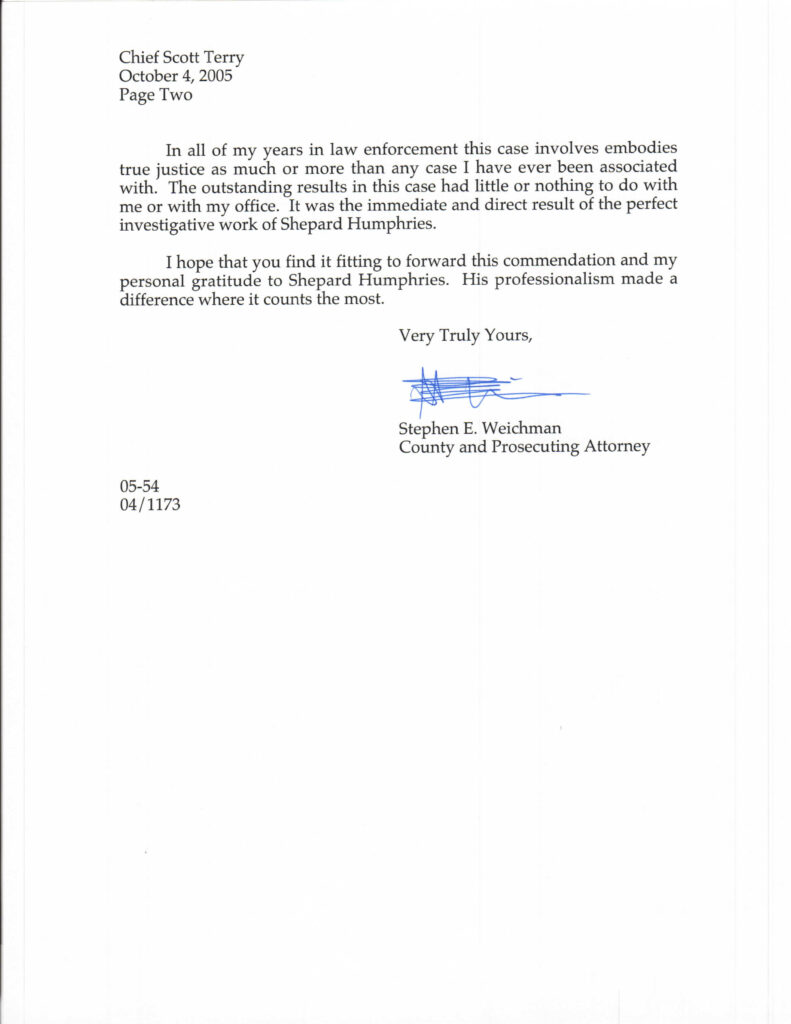 “I am writing this letter as an open endorsement of Shepard O. Humphries. I have known Shepard since he became a police explorer in the 1980’s and watched him grow and mature within his position as a police officer.  Shepard is a person of character, dignity and integrity.

He is highly intelligent, has demonstrated a commitment to service, and maintains a proper perspective and focus. He projects a professional and competent attitude, has shown leadership qualities and is an excellent communicator. He is dedicated to his family and friends, is a strong team player and someone that can be trusted.

However, having said all that, Shepard’s strongest suit lies in his ability to think creativity and use his imagination when problem solving. If I would refrain from telling Shepard how to do thing, only what to do, I was always surprised with the inventiveness of the results.
Please accept this letter as my support for Shepard Humphries .”

“I have known Shepard Humphries for sixteen years. On a personal level, I have always found him to be extraordinarily compassionate and possessing one of the best senses of humor I have seen in a person. On a professional level, as a police officer, he exhibited those same qualities, but I also found him to be dependable, a man with a great deal of integrity, and a person in whom I would have confidence in placing a great deal of responsibility.”

“I have worked with Shepard for several years now and I have always found him to be professional, hard working and very dependable. His clients will benefit from his intelligence and great work ethic.”

“I’ve had the privilege to know Shepard for the past 16 years, during which I have known him to be a very bright, insightful and talented detective. Shepard’s work on many involved sexual assault cases proved to be invaluable and provided a service to his community that was second to none. Anyone considering the services provided by Shepard can do so without reservation.”

“I have known and worked with Shepard for a number of years. The association has always been enjoyable as Shepard has always exhibited a healthy sense of humor and an eager attitude. Shepard is a hard worker and I have always found him to be honest about both his work and his personal convictions.”
-Attorney Clark Allen, Teton County Attorney’s Office

“I have known Shepard since 1991 and I had the great pleasure to work with him for over eight years. Shepard has always been creative and a hard worker. I truly believe Shepard will give 100% on every job and will go out of his way to satisfy his client’s security needs.”
-Sgt. Cole Nethercott, Jackson Police Department

“I had the pleasure of working with Shepard at the Jackson Police Department over the past year. Shepard is incredibly dedicated to his work; in fact he consistently went above and beyond the call of duty every single shift. Shepard is also well known within the Police Department as well as within the community, for his extraordinary people skills and wonderful heart. It you have the opportunity to work with Shepard, consider it a great privilege to work with such an outstanding human being!”

“I am responding to a request from Shepard Humphries for a brief character recommendation. I have known Shepard for over thirty years and am happy to share my observations. From a youth through his young adult years Shepard has had an enthusiastic and diligent work ethic. He has shown a remarkable aptitude for self-development coupled with excellent people skills, and seems determined to be a success in his life endeavors. If I were recruiting employees at this time he would be the type of individual I would seek. My family and I have enjoyed our relationship with Shepard and wish him well in his future pursuits.”

“In the years I’ve worked with Shepard, I’ve seen a hard working honest man holding a high degree of integrity and a sense of humor on the side. Shepard was a great police officer and his leaving is a loss to this community.”